Jetpak offers logistics solutions in Europe and we specialise in time-critical air-based express and long distance deliveries from door-to-door in the Nordic region. We primarily operate B2B.

The overall market for logistics solutions comprises a number of different sub-segments based on different types of business models and services. These are usually divided into:

Jetpak is exclusively active within the CEP segment, the segment which generally has the highest margins within the logistics industry.

The market for courier, express and parcel shipments (CEP)

Jetpak is particularly strong in spontaneous air-based express shipments delivered the same day. We call this offer Express Ad-hoc. During 2020 this segment made up about 39 percent of the company’s net turnover, i.e. MSEK 343. The segment also accounts for the majority of air-based shipments within Jetpak. This is a highly niche market and is therefore a limited part of the total air-based express market in the Nordic region.

The total Nordic CEP market amounts to about SEK billion 30. In the coming years this market is expected to grow by an average of around five per cent per year, with small differences between geographic areas.

Jetpak estimates that the market for express shipments in the Nordic region is primarily affected by the overall economic situation in the region. In addition to this, there are some specific trends that further drive market development and the increased need for express shipments. The trends we see are centralisation of warehousing, focus on speed, e-commerce and the reduced competition in air-based express deliveries from postal operators.

The largest operators in the CEP market have volume-based business models based on the “hub-and-spoke” principle. Such business models focus on large volumes and on reducing unit costs by controlling deliveries through a few central warehouses, where shipments with the same final destination are sent together. Examples of such operators are DHL, FedEx and Postnord (”the integrators”). In contrast, Jetpak uses a door-to-door model, where each package is handled individually. With access to 24 different airlines with approximately 4,000 departures daily, times for pickup and delivery can be tailored to the specific needs of the customer. Each shipment is sent from one point to another without a stop (“point-to-point”), as quickly as possible. This flexibility creates opportunities for Jetpak in an otherwise quite inflexible market.

At the same time as Jetpak offers this unique service that the integrators do not provide, we consider those operators to be our largest competitors within systemised express solutions – Express Systemised. This, despite the fact that the integrators also make up Jetpak’s largest customer segment with approximately 49 percent of the net turnover for 2017. In other words, we often act on behalf of the integrators and deal with special time-critical deliveries that they do not perform themselves and/or where they lack the local presence for transport to customers. 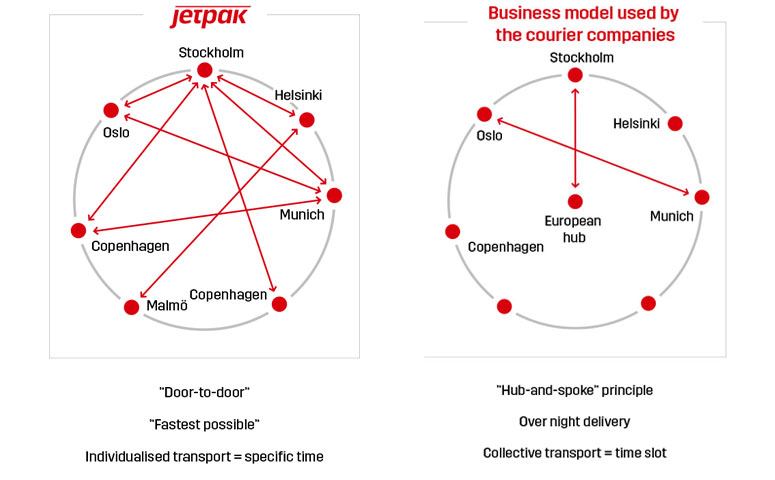